Back to
map Back to
images
Discovery

Angelica, the emblematic plant of the Marais poitevin

Home > Blog > Angelica, the emblematic plant of the Marais poitevin

It is one of the Marais poitevin’s emblems, one that we see in its natural environment during a bike ride or a hike. The Angelica can be wild or in cultures. Its long grooved stem, at the same time thick and hollow, can grow up to two metres high and its characteristic, aromatic odour makes it easy to spot from any walker. As an icon of the Marais poitevin, it can be used for cooking, in confectionery and even in cosmetology.

What is the Angelica? 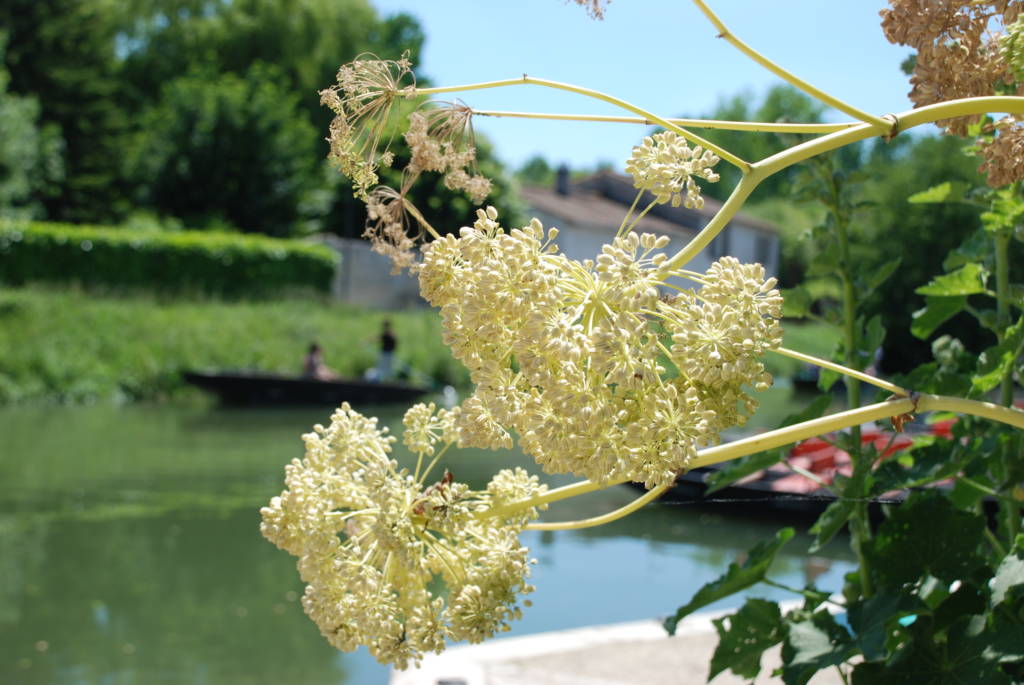 The angelica archangelica – full name – is to this day the world’s biggest aromatic plant. It is claimed to have numerous medicinal but also more or less magical virtues… Known as the angels’ herb, it would have been used to cure plague, but also to cause abortions, hence its nickname of “back-alley herb”. An era forever gone.

From the same specie as anise and parsley, the angelica of the Green Venice has been a popular aromatic plant since the 12th century. Introduced by the monks who were in charge of the development of the channels in the Marsh, the angelica is harvested in summer. It can grow up to two metres high, whether it be wild or in cultures. A disease-resistant plant, it likes in particular wetlands, hence its perfect integration in the Marais poitevin.

Its subtle perfume reminds of peppermint with gentian and génépi. Getting benefits from a strong promotion, the angelica of the marsh comes today in a variety of forms. If it is delicious to bring an aromatic touch in pastry, you can find it candied, as a liquor or syrup, or even as an infusion.

Its essential oil, reputed invigorating and anti-stress, is also used in cosmetology to create soaps and shampoos and in medicine thanks to its soothing virtues. One of its particularities is that all of its parts – leaves, roots, seeds – are edible and each used in a domain.

Promotion and festivals of the angelica

Previously unknown outside the Marais poitevin, the angelica is attracting more and more people. Founded in 2000 on the initiative of Bessines’ Festivities Committee (Deux-Sèvres), the Niort-Marais poitevin Association of Promotion of the Angelica perfectly succeeds in promoting this local product. As a gastronomical and agricultural heritage, the angelica of the Marais poitevin is well supported by the adherents of the association and present in numerous events in order to assure the promotion – up to the Paris International Agricultural Show!

It is thanks to the association of promotion of the angelica that there is the Annual Festival of the Angelica in Bessines. Tastings, guided tour of the plantings, animations and exhibitions on the angelica have punctuated one Sunday in May for more than 15 years, just a few kilometres away from Niort.

If you missed the event in May 2019, you must wait until 2020 and the 16th edition. The impatient visitors can already discover or rediscover the angelica of the Marais poitevin on the local markets, in local product companies or directly at the tourist offices that promote it.

Do not hesitate to order products based on angelica: jam and sweets, liquor, soap or eau de toilette, there is something for everyone!

Built by Niort Chief architect Georges Lasseron at the end of the 19th century, the Jean Macé High School for Girls is currently home of the main museum in Niort, the Bernard d’Agesci Museum. The multidisciplinary art collections are at the same time didactic and historical, because we can visit the Fine Arts section, the […]