Landscapes of the Marais poitevin

A coastline created by man

If the Marais poitevin Regional Natural Park is nowadays a magnificent wild space with unspoilt surroundings, it was first a gigantic gulf, the Gulf of Pictons, which was partly submerged by the ocean at high tide and subject to floods.

Generations of monks and marsh inhabitants gradually shaped the landscape by developing canals, dykes and by planting trees to protect the Gulf from frequent floods and exploit the lands.

In order to facilitate the storm water drainage at low tide and create water reserves in summer, they dug ditches and canals : that is how the dry marsh was created.

On the contrary, some of the areas located behind the dykes are still under the mercy of floods when water can’t be adequately drained and thus stay flooded : it’s the wet marsh. It was only under the reign of Napoleon the First and his desire to make the Sèvre niortaise river navigable that this part of the Marais poitevin was designed like it is nowadays thanks to significant river landscaping projects. Its most charming part is the famous Green Venice. 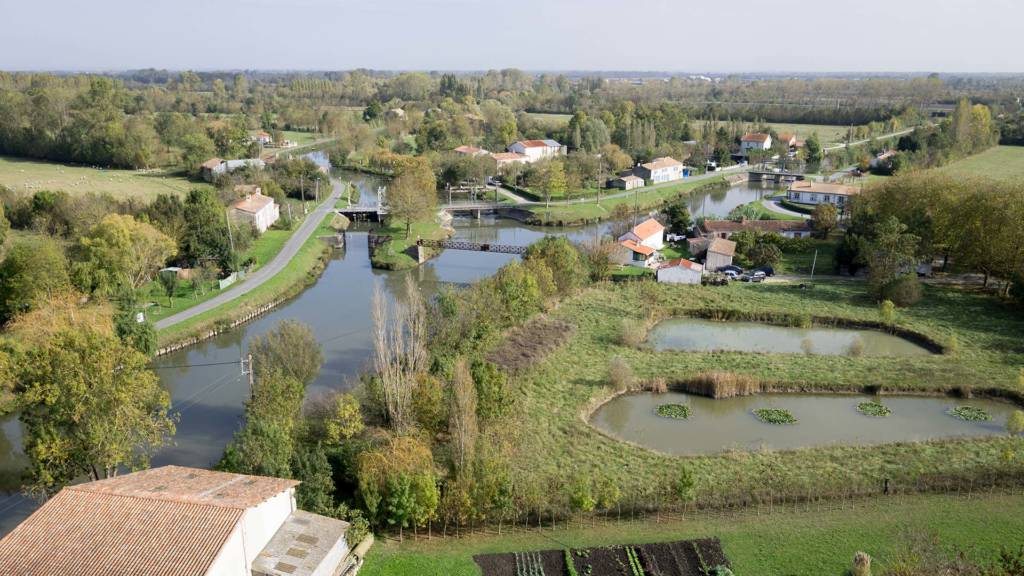 The series of landscaping projects conducted in the Gulf of Pictons led to the gradual reduction of its area: There is nowadays only a coastal part called the Aiguillon Bay. It’s a great starting point for a walk on the trails of the Marais poitevin that will explore the rich landscapes. Around the Aiguillon Bay and its protected lands linked to the rhythm of tides, the magic always works at low tide and reveals vast areas of mud, where you can observe birds pecking. 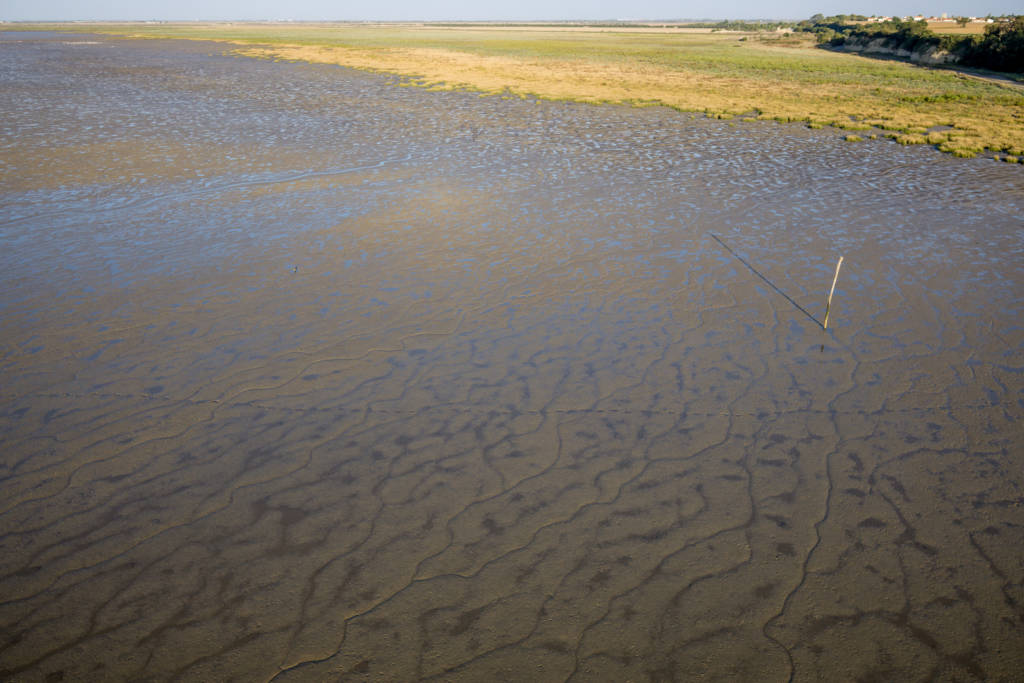 When there are high tidal coefficients at high tide, the sea front dyke protects the dry marsh but submerges the preceding herbal areas, called the salted meadows or “mizotte” in French.
Those lands in the Aiguillon Bay aren’t used for grazing, but hay can be harvested.

DISCOVER OTHER WALKS TO DO IN THE MARAIS POITEVIN

Protected from the floods, the walk can go up to the dry marshes, those large open sky areas where only a few bushes follow the canals and ditches that delimit the crops and meadows of the Marsh. 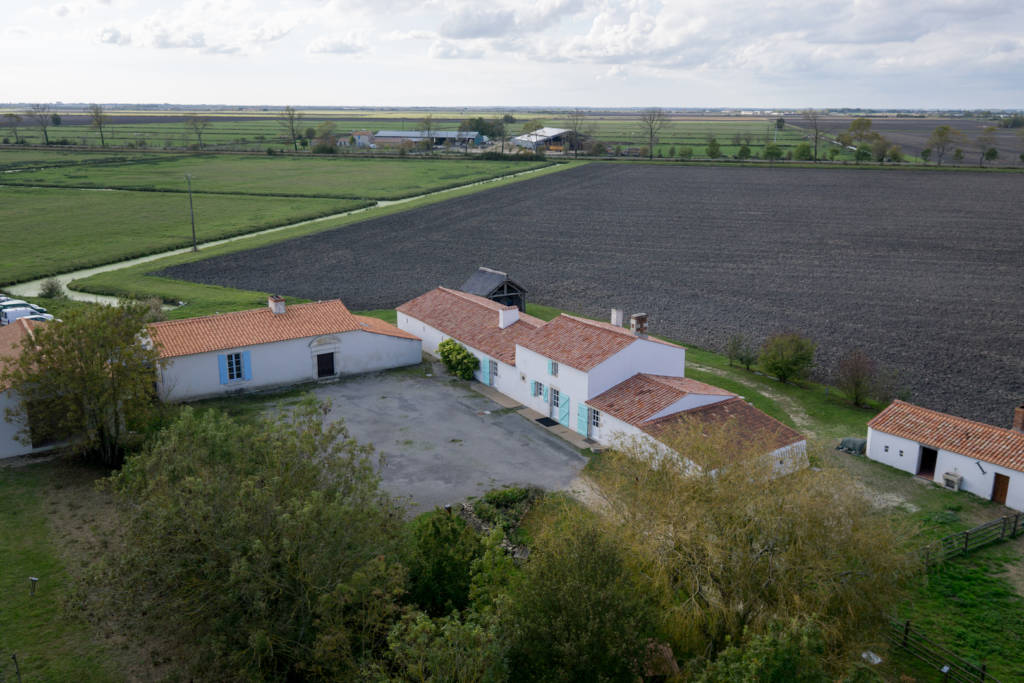 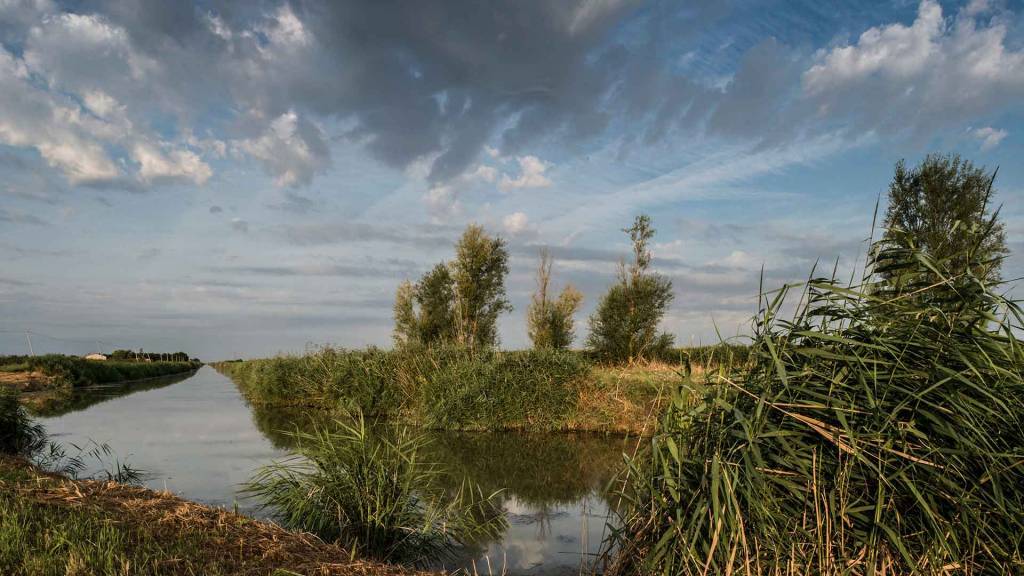 In view of the land quality, numerous farms grow soft wheat with well-known quality. In the past, livestock farming was very common, like for example the Poitevin horse or more rarely the Poitou donkey.
Here are a list of landscapes that you can see during a walk in the dry marsh.

During a walk in the dry marsh, you can see limestone mounds rising up from the crops and meadows, as a testimony of their resistance to erosion. The edge of those islets is sometimes steep, giving them the aspect of a small whitish cliff, sometimes in low slope, which seems to glide through the marsh. 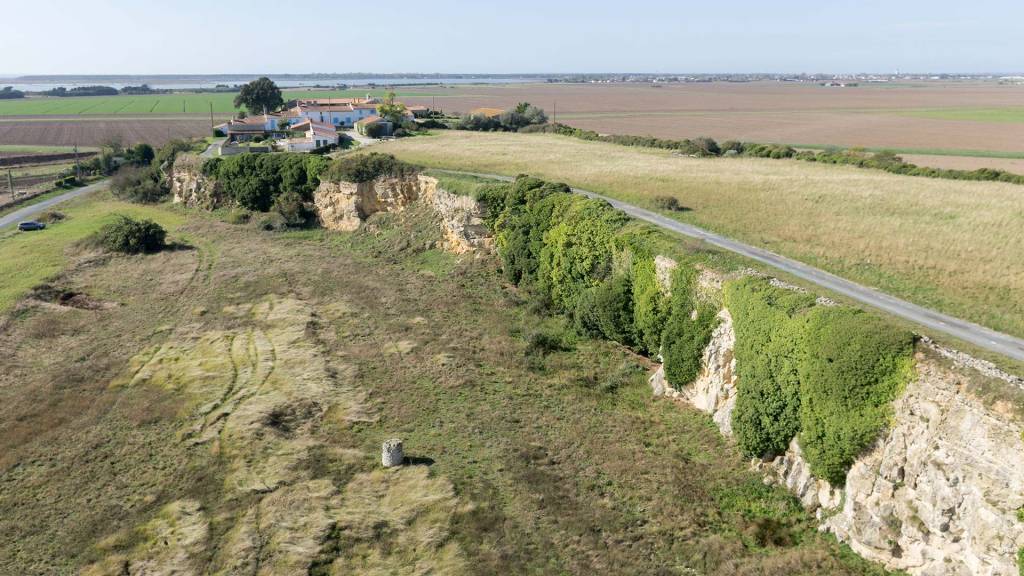 Men quickly took advantage of those geological formations and used them as areas of relocation for hunting and fishing in the Gulf of Pictons. Nowadays, villages like Chaillé-les-Marais or Marans are located on those limestone islets, but you can also find crops, gardens or meadows.

Contrary to the dry marshes, the wet marshes of the Marais poitevin Regional Natural Park are subject to floods and thus are flood-prone areas. They are often recognised as the most charming area of the Marais poitevin and there’s a good reason for that: numerous canals implemented by men allows tourists to enjoy nature during a boat trip, a walk or a bike tour.

As you continue your walk in the wet marsh, you end up in large meadows that can be 250 hectares in size: the common lands. In spite of appearances, those large open areas aren’t flat as they seem to be: they alternate between the “belles” (upper parts) and the “baisses” (lower parts). Thus, water level isn’t the same everywhere, and fauna and flora spread according to their needs in water. We can find true treasures of nature: more than a hundred different species flourish, such as the adder’s-tongue spearwort or the precious hedge hyssop.

Cows in a common march.

Those meadows full of life are the sole property of the commune (hence the name), which authorises the breeders to come and let the cattle (cows and horses) graze while paying a tax.

They usually come in spring that they come, at the opening of the common land. In autumn, soil becomes too humid and is no longer practicable, and cattle has to go back to the stable until the next spring.

The wet marsh of the Bocage

Contrary to the open sky countryside in the common lands, the wet marsh of the bocage is characterised by its vegetation that stops the vision and delimits the area. But at the same time, it guides our stroll in the Marais poitevin, walking along those natural barriers that lead us into a unique world. 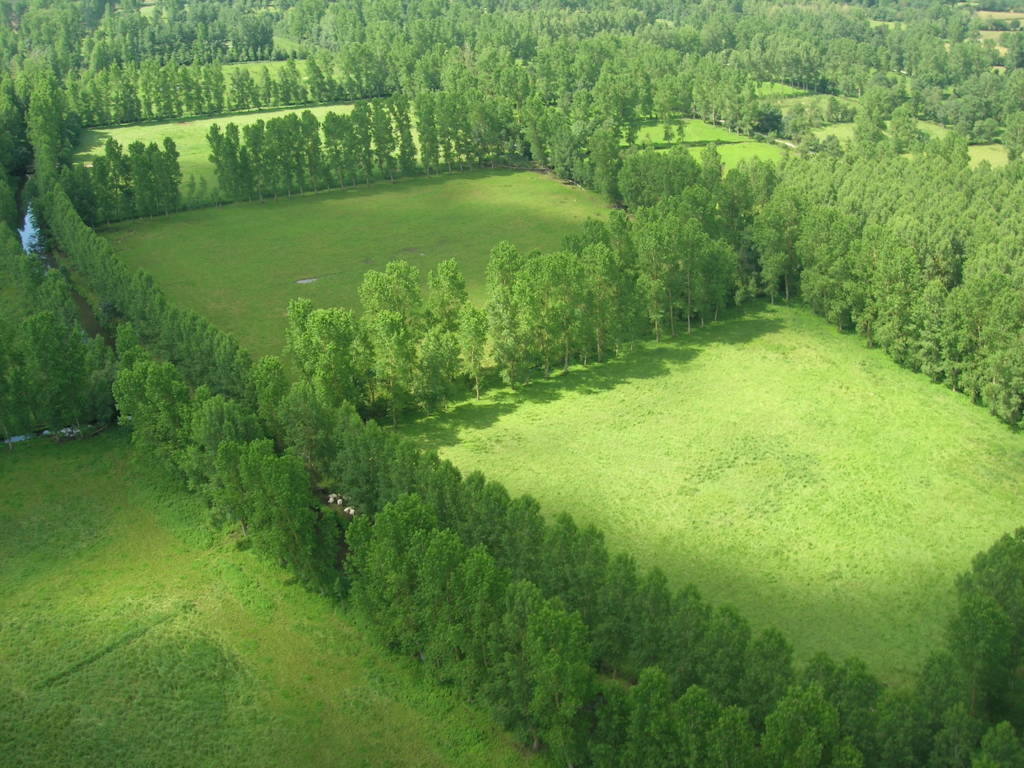 As those areas are located in the wet marsh, they are subject to floods. To prevent the banks to fall down, several rows of trees are here to maintain the soil thanks to the roots.

However, landscaping works have been necessary to facilitate the water flow, because the wet marsh of the bocage remains inundated most of the time. Ditches, “conches” (small canals), and canals have been dug on several hundreds of kilometres by the marshland inhabitants, thus forming a hydraulic network dense enough to be used as a river communication channel in the Marais poitevin.

Those wild marshes have thus become the pleasant marsh of the Bocage of today where gardens, vegetable crops and meadows found their place in this tree-lined landscaped. 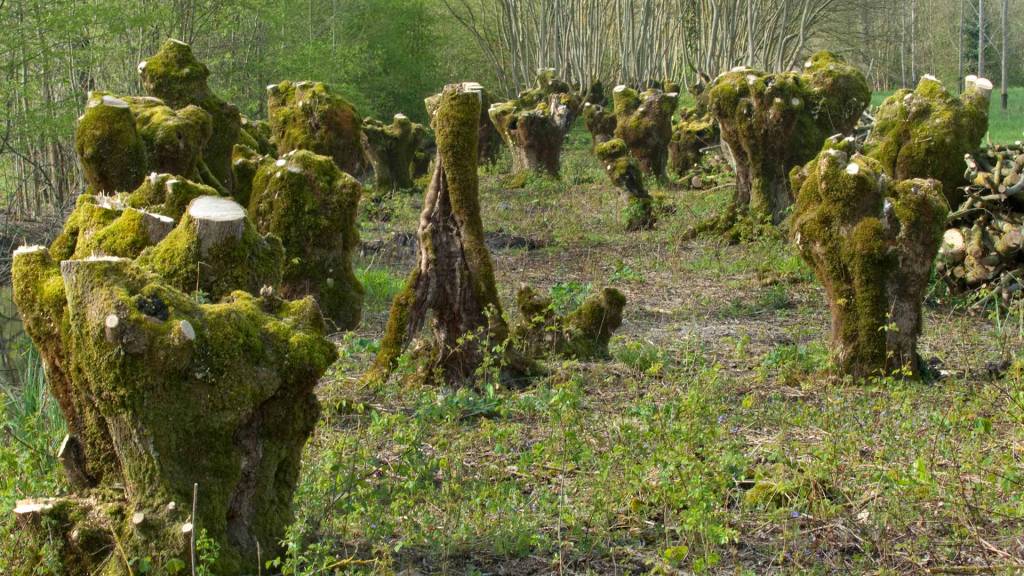 “Terrées” that have not been maintained are invaded by a vegetation that reclaims its rights, leaving hawthorns, blackthorns or even French oak trees to grow at their convenience. Poplar trees can also be planted in this fertile soil to get peeling logs.

Our walk is the perfect occasion to discover nice landscapes in the Marais poitevin, but also to look back at its history. That is the case, for example, for “bri” holes that are coincidently linked to the former areas of “bri” extraction, a grey clay with bluish sheen that was used in the brickyards and tileries of the Marais poitevin. Once this clay had been extracted from the ground, the dozen metre diameter holes were then filled with rubble or were left to form a pond.

Today, many animals and plant seek refuge inside those holes that you may observe during your walk that has almost come to an end.

Before leaving the wet marshes, please notice that the State ahs recognized the exceptional character of the landscape that can be seen in the wet marshes of the Marais poitevin: the label “French classified site” has been awarded in 2003, then has become the seventh “Grand site de France” in 2010 (like the Raz Pointe or the Puy-de-Dôme). Those recognitions aim to promote but also protect the richness of those landscapes which are well suitable for walks.

The edges of the wet marshes

As you distance yourself from the wet marsh to end this walk, you can notice several changes that show you’re leaving the marsh: the soil becomes browner, the number of trees diminishes, and a gentle slope appears: it’s the watershed, spreading on the meadows of the Aunis region, Luçon, Niort and Fontenay-le-Comte.

One last sure sign is the increased presence of farms, sufficiently close to the wet marsh to allow farmers to work while being outside of the flood zone. The same applies for the numerous cultivation fields located here and conclude our walk in the landscapes of the Marais poitevin in a beautiful way.

DISCOVER ALL OUR TESTED AND APPROVED CIRCUITS IN THE MARAIS POITEVIN

Trail-running routes in the Marais Poitevin!

Ideas for exploring the Marais Poitevin

Find the hiking trails on the website of the Marais poitevin Are you looking to explore the Marais poitevin? Look no further, click on the “Itineraries” tab and you’ll find more than 190 hiking, cycling or horse-riding loop trails. On this “itineraries” page you’ll be able to filter or narrow your search by type of […]